It’s about the garage gyms, stupid

Written 11:35am, Qingdao China. In the backset of a car

Have you ever been sick in Bangkok?

I have- just this last weekend.

Downside: you feel like you’re going to die, far away from home.

Upside: You can walk into a pharmacy, wave at your head and general demeanor/situation, and they’ll sell you whatever drugs you want.

But now I am in Qingdao, China, and mostly better. And truthfully, I knew I was in for a rough few days- I never thought I was going to die. I’m now meeting with our principal bumper plate factory boss. We’ve been doing business with these guys since 2013. David is the name of the boss/laoban. We’re business partners, but he’s also my friend.

I remember our excitement when we first saw one of his 10# bumpers- back in early 2013. We had found the sample somewhere and immediately knew it was special. It took me another few months to positively ID the factory and visit. I found the factory while I was in a little coffee shop in Shanghai. I sent them an email, and immediately heard back from them. We had a meeting scheduled for a few days later, and shortly after that, we ordered our first container from them.

Man, we’ve come a long way since then!

The bumpers started out awesome, but in the past 3 years, this has turned into one of the best partnerships we have- continually pushing the boundaries of durable, affordable bumpers.

So, I’m here refreshing the connection, and working on some new cool stuff.

But back to basics for a minute.

Before I founded FringeSport, I built a pretty awesome garage gym, and I did it on a budget too. Here’s a link to what I had back then (nice Google Doc Spreadsheet with all the details).

I’ll always remember Greg Glassman talking and writing about building “a world class strength and conditioning facility in your garage.”

It made sense then, it makes sense now, and it will make sense in the future.

Even as I go to one of the best gyms in Austin (when I’m actually in Austin), and we have an awesome gym at Fringe, I have a great garage gym at my house.

It’s where Fringe came from, and we’ll always be there for people looking to build that “world class strength and conditioning facility in their garage.”

And that’s what our sale is this week- up the 25% off our garage gym packages. 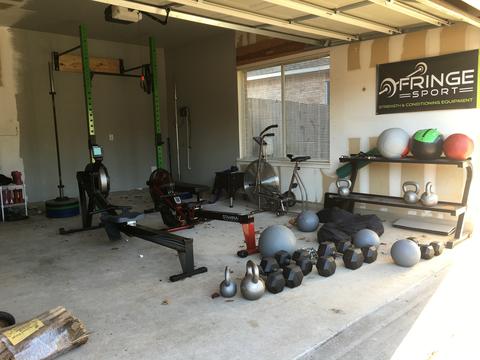 Two of the things I love about travel are meeting people and having new experiences.

When I was in Bangkok, I got to hang out with Ben from Wodprep again. I had met him in Tokyo a few months back… and incidentally, we got naked together within 2 hours of meeting… but perhaps that’s a story for another day. Sorry- I got sick so this is the only pic I have of me and Ben from this weekend.

But as for the experiences, I typically try not to train on the road, but rather exercise and experience what I can.

To that end, I went running with a few friends in Bangkok and ended up at Benchasiri Park. It’s a pretty small park by Thai standards, but everything there is free, and super cool. And I got to get cool pics from it. That’s it for now. By the way, we are working on an awesome new product that’s been 3 years in the design and development process. I’ll announce it shortly. I’m super excited!

PS, as always email me @ peter@fringesport.com if I can help in any way, or if you just want to reach out! Sean K sent me a really nice email that weirdly helped buoy my spirits when I was feeling like death in a Bangkok hotel room.