BUMPER PLATES: WHAT THE HECK ARE THEY, AND WHY DO YOU NEED THEM IN YOUR GARAGE GYM?


Our bumper plates are made specifically for athletes looking to get strong and drop their barbells. Bumper plates are going to be thicker than regular iron plates, allowing less weight to be added to your barbell, but are going to allow you to drop even your heaviest PR repeatedly from hip height, shoulder height, or overhead without damaging the plates themselves or the floor underneath. Bumper plates are designed to take impact without breaking themselves, your barbell, or other equipment and flooring.

Bumper plates won’t make you inherently stronger, but they do give a mental edge by knowing that the plates and your barbell won’t be damaged from a dropped or failed rep. Bumper plates are better for the athlete looking to train in Olympic lifting, Powerlifting, CrossFit, and other barbell training.

Bumper plates, in certain cases, can be mixed with iron plates (as long as they’re not dropped). If you’re on a budget and need to mix iron and bumper plates, there are no laws that say it can’t be done. However, it’s important to be mindful of the movements you’re performing and at what capacity they’re being performed so the iron plates and your barbell won’t experience damage from dropping.

If you’re in a quiet, subdued neighborhood, it’s unlikely your neighbors will enjoy the sound of metal plates crashing to the ground for an hour plus every day. That’s where bumper plates come in. Bumper plates are designed to encapsulate the iron weight in the middle with durable rubber that not only protects the floor, your bar, and other equipment, but deadens the sound of the barbell making contact with the floor. Although it’s not silent, bumper plates certainly quiet the noise of a heavy bar being dropped. 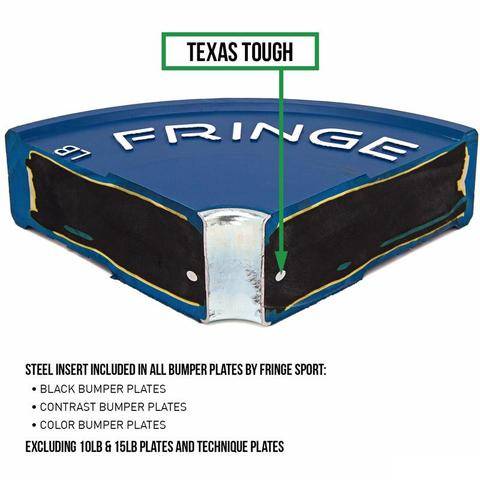 Our bumper plates feature extremely durable, low bounce rubber that surrounds the iron in the middle of the plate, and a metal insert that attaches to the ring of the bumper plate. These hooks provide extra surface area to bond the rubber to the steel, creating a much more long-lasting and hardcore bumper plate that’s less likely to break or bend overtime.
They’re for the beginner, the expert, and everyone of every level in between. Our bumper plates were designed with the garage-gymmer, CrossFit box, and community gyms in mind. No matter the kind of fitness you’re doing, these bumper plates are durable and will remain intact. They’re meant to be lifted, slammed, dropped, and beaten on in your pursuit of strength in the Garage Gym Revolution.Durability is important to us, because it means a high-quality bumper plate for you and your lifting. We’ve taken the time to specially design our bumper plates with 100% virgin rubber for a low, dead bounce for your safety and the safety of those (and the walls) around you. This means that when dropped, even from overhead, you won’t be chasing your barbell down the street. It’ll remain in front of you, where it was dropped. Our bumper plates can be dropped from any height time and time again.Our bumper plates feature a beveled edge for easier grip when transporting them from storage to your barbell, and because they’re 100% virgin rubber, they won’t break or bounce very far if dropped.

WHAT TO LOOK FOR IN BUMPER PLATES

Why Invest in Color Bumper Plates

What are Technique Plates?

Tech plates are the predecessors to bumper plates. Before the technology and engineering existed to make high quality (light) weight plates from rubber (bumper plates), tech plates were the answer to hold a barbell at proper IWF height to start your first pull for the clean or snatch (or the deadlift for that matter).

While they absorb the impact of a drop, they don't bounce like bumpers do- and they tend to be loud on the drop. Durability of tech plates is a strong point, but don't believe anyone who claims they're unbreakable. I've seen them break- although it takes quite a few (thousand) drops.

If you want to load a bar as light as possible, but still have a lifter start their pull from the correct height, use 5# tech plates.

In every other situation, use bumper plates.

Tech plates are more expensive than bumpers, they are louder when the bar is dropped, and with today's top notch bumper plates (ahem, OneFitWonder), the durability gap is way smaller than before. What to Look For In a Bumper Plate 3 Reasons Why I Invested in Colored Bumpers 3 Ways to Store and Upkeep Bumpers 5 Ways to Utilize Your Bumpers

WHAT ARE COMPETITION BUMPER PLATES AND HOW DO THEY DIFFER FROM NORMAL BUMPERS?

We carry the cheapest bumper plates that you would want to buy.

In other words, if you look hard, you can probably find cheaper bumper plates... but then you've got to lift with them. We've been in business over a decade, and in that time, we've made our reputation on having the best, most durable bumper plates in the world.

But aren't all bumper plates the same? They sure look pretty similar!

All bumper plates are NOT the same. That's kind of like saying that a Hyundai and a Ferrari are the same- since they are both cars and you can order them each in red.

In the same way, even though many bumper plates LOOK the same, what's inside is different.

Let's start with the rubber. We use pure, innocent, virgin rubber for all of our bumper plates. What this means is: